In an interview placed in two Dutch news papers, Van der Kooi talks about the changes in biodiversity, the (Dutch) landscape, and the animals he painted inside his house in Friesland (in Dutch; Leeuwarder Courant and Dagblad van het Noorden 7 April 2017).
Leeuwarder Courant
Radio 1 interview

Masterclasses in Israel and Palestine

Van der Kooi was guest in a regional tv program

Jan van der Kooi discusses his recent travel to Israel and Palestine, how he experienced the local disturbances and his guest professorship in the region.

The show (in Dutch and Frisian) can be viewed here.

Media attention about the Sunlight exhibition at Arti Legi in Gouda, 2014

The exhibition of Jan van der Kooi in the Dordrechts Museum on Dutch television.

Documentary of Frank Peters on behalf of the Dordrechts Museum. Click here.

Interview about the old scetchbook that belonged to the Swedish royal family and contained paintings by Michelangelo and Raphael, now in the possession of Jan van der Kooi (Dutch).

"The horse as a challenge"
Click here for the article (Dutch).

The heart of my house: Jan van der Kooi speaks about his house and his studio.
Click here for the article (Dutch).

Jan van der Kooi draws in a very old scetchbook that has been in the possession of the Swedish royal family, Michelangelo and Raphael (Dutch).

"Painter working in silence"
Click here for the article (Dutch).

Click on the image to see the video.
Check your settings if the video does not work or have a look at the website of Het Klokhuis.

Have a look around the exhibition of Jan van der Kooi held in 2007 - 2008 at Museum De Buitenplaats.
Note: QuickTime Player is needed to allow the link to work.

In 2007 Jan van der Kooi participated in an exhibition of the Royal Society of Portrait Painters in London.
Leeuwarder Courant February 5, 2007: click here. 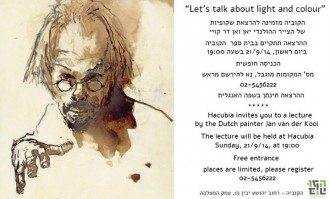